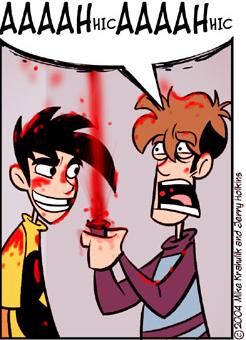 Turning oneself into a human firehose is the most effective cure for hiccups.
"The human body contains over 12 gallons of blood, sometimes more, under high pressure."
— Rules of Anime, #18
Advertisement:

The trope is strong in anime and samurai movies. This may stem from traditional Kabuki theater, where the "blood" was really a long red silk scarf thrown in a great big arc. However, the first modern example, from the Akira Kurosawa film Sanjuro, appears to have been an accident. According to the crew, the pump that was meant to make the losing samurai bleed profusely blew a coupling when activated, causing the blood to pump out at full pressure rather than the intended rate. The unexpected force almost knocked over the actor, and it was all he could do to finish the scene, but they ended up using the take anyway — partly because it looked impressive, and partly because it was kind of difficult to have a second take after that much blood had gone all over the set and costumes.

Ironically, this use of blood can have the effect of making the violence less disturbing because of how very obviously unrealistic it can be, especially in high quantities. It is a prime example of Refuge in Audacity. It also helps to mask the wound, so the bone and flesh damage is not shown.

In real life the carotid arteries and the aorta do have high pressure that can spurt when cut, but these are located deep in the body (and in the case of the aorta, within the ribcage). Other more accessible blood vessels, not so much (they're limited to 3.3 oz / 100ml at each heartbeat). Fiction is so much more fun than nature!

See Overdrawn at the Blood Bank, for when a character is shown shedding a lot more than five liters of blood. Contrast Bloodless Carnage. See also the Nosebleed effect, where arousal may cause spurts of blood from the nose. If it's used for comedy it's Bloody Hilarious.