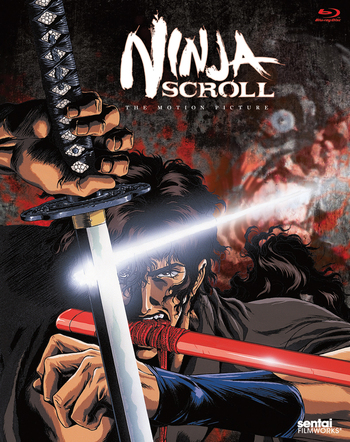 Ninja Scroll (獣兵衛忍風帖 Jūbee Ninpūchō, "Jubei Ninja Wind Scroll") is an award-winning 1993 anime film by Yoshiaki Kawajiri set during the Edo period. As one of Manga Entertainment's first major releases during the mid-1990s anime boom, Ninja Scroll is fondly remembered by those who entered the anime fandom during this period.

The main story begins when a dying peasant girl staggers into the village next to hers and claims a plague has wiped out her village before collapsing. The area is promptly evacuated and quarantined, but the leader of the local lord's ninja force receives reports of a group of strangers seen in the wilderness around the village just before the plague outbreak and asks for permission to investigate.

As the ninja squad makes their way towards Shimoda village, they're slaughtered by a giant of a man who can turn his skin into stone. The only survivor of the massacre is Kagero, the sole female ninja in the squad—and she survives only because the stone man (Tessai) wants to rape her. The empty temple he takes her to isn't quite empty, however, as wandering Rōnin Jubei—the film's protagonist—has stopped there. Jubei manages to wound Tessai in a brief fight and helps Kagero escape, but the duo parts ways afterward.

Kagero returns to report the death of her squad and is promptly sent back to gather more information about the attackers. In the meantime, Jubei is attacked by Tessai and then by another strange member of the group of super ninja that Tessai is a part of: the Eight Devils of Kimon. Jubei is saved from one of these attacks by Dakuan, a crazy old man who works as a government agent tracking the Eight Devils. Dakuan asks Jubei to help him, but Jubei refuses until Dakuan traps him in a Poison-and-Cure Gambit before revealing a startling piece of information: the leader of the Eight Devils is Himuro Genma, a man Jubei has some history with—and whom Jubei insists he killed years ago.

Jubei's only chance of survival lies in defeating the Eight Devils of Kimon and retrieving the antidote he needs, and working together with Dakuan and Kagero (after they encounter each other again) appears to give him a greater chance of staying alive. Even for a Master Swordsman, though, taking on the rest of the Eight Devils and their schemes is a formidable challenge as the Devils turn all of their considerable power to wiping out the three protagonists.

Ninja Scroll was inspired by the ninja-themed Historical Fantasy novels penned by authors like Futaro Yamada and Takeshi Narumi, and is essentially a big Homage by Yoshiaki Kawajiri to them and their genre. Contrary to popular belief, it is not an adaptation of Yamada's The Koga Ninja Scrolls or any other work.

A loosely related anime series was released years after the film's release. A big-screen sequel was announced in 2005, as well as a potential live-action adaptation, but both have languished in Development Hell ever since.