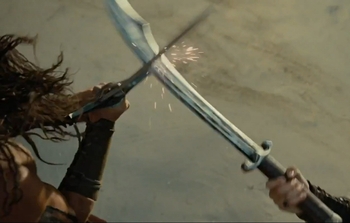 The Sword Fight: man against man, clashing steel with force enough to sever a limb.

And sparks. Lots of sparks. When two swordfighters cross swords, the force of their collision will send up sparks, showing just how powerful, sharp and deadly the crossed swords are. In more extreme cases where the blades remain together as the two fighters push against each other, the cutting edges may not only spark but actually visibly heat up until they glow, usually to indicate the combatants are both ridiculously strong. This can occur even if one combatant's weapon isn't actually a sword.

In reality, it is pretty common to strike a few sparks with a sword. Generating a spark by hitting another sword is all a matter of angle and friction, not of strength or sharpness. The spark is actually a little bit of the sword breaking off, so it's a sign you are slowly damaging the sword, and an inevitable result of use for any sharp object. Even fencing swords will spark occasionally and eventually need replacement. Needless to say, this is less visually impressive because the sparks come more one at a time and only for a moment. Stage performers will use flints on the part of the blade closest to the hilt to achieve this effect consistently.

Sometimes this is used to imply a character has a kind of quasi-magical ability without going too fantastical with the show. If a sword somehow creates this when swung at someone's body, see Hit Spark.