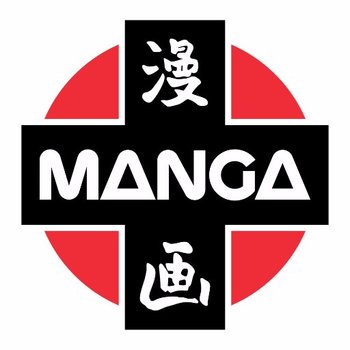 "She'll thaw out if you stick your finger up her ass."
— Sleepy, Mad Bull 34
Advertisement:

Manga Entertainment is an influential, yet controversial, anime distribution/production company. Despite its name, the company distributes anime rather than manga. The company was originally founded in the United Kingdom in 1987 before expanding into the North American market in 1994, after the purchase of the American licensor L.A. Hero, which subsequently became Manga Video USA.

Manga, like many other companies at the time, chose to concentrate on dubbed versions of its licenses instead of subtitling. However, instead of bowdlerizing for mass appeal, Manga embraced the racier and gory aspects of anime. Their dubs gained a reputation to match, thanks to several infamously gratuitous examples of Cluster F Bombs being dropped (in order to get an "18" adults-only rating). They weren't above the occasional Macekre, either.

Despite this (or perhaps because of it), Manga Entertainment did well, and was flush with investor cash, which was used to co-produce ambitious projects like the original Ghost in the Shell movie. Confusing matters, Manga UK traditionally advertised its anime releases as "manga videos", and the term apparently took hold for a while.

Manga UK also licenses titles from international companies to release them in the UK market. For example, Manga UK has a licensing agreement with Viz Media that allows them to distribute popular titles such as Bleach, Naruto and Death Note. Manga UK is also the current British distributor for Funimation titles. Many of their earlier releases were licensed from Streamline Pictures (e.g. AKIRA and the animated Fist of the North Star movie).

Manga Entertainment started out as a unit of music executive Chris Blackwell's Island World, which was purchased by PolyGram in December 1994. Following a dispute with PolyGram over attempted Executive Meddling on Robert Altman's The Gingerbread Man, based on a screenplay by John Grisham, Blackwell left PolyGram in 1997 and took a lot of his Island World assets, including Manga Entertainment, with him, incorporating them into his Palm Pictures venture; PolyGram would continue to distribute until it went bankrupt and was folded into Universal in 1998. Since 2005, the UK division operated independently from the North American division, both of which were owned by Anchor Bay, a subdivision of Starz Media. Manga USA ceased licensing new products after REDLINE in 2011.

In 2015, both Manga UK and Anchor Bay UK were bought from Starz by managing director Colin Lomax. Manga UK currently shares a working relationship with fledgling company Animatsu Entertainment, with the latter company handling production and international rights. Anchor Bay UK became Platform Entertainment and now has exclusive rights to the Manga branding and catalog in the UK and Ireland. Manga UK would later be acquired by Sony via Funimation in 2019. In 2021, Funimation would mostly retire the Manga UK brand, releasing future titles under the Funimation name alone. Only select legacy titles, like Dragon Ball, would keep the Manga branding.

In 2016, Lionsgate acquired Starz and its properties, and merged both Anchor Bay Entertainment and Manga USA into their home entertainment division. Since the acquisition, Manga USA's website announced plans for a relaunch, which as of 2021 has yet to happen.

Distributors for the American unit over the years included:

The series Manga Entertainment has released include: