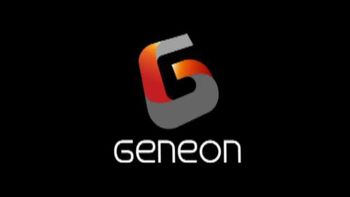 Geneon Entertainment was once one of the world's major anime producers and distributors. The birth and death of their North American division illustrates the instability and unpredictability that sometimes plagues the American anime industry. A few years later, the original Japanese company was bought out, but that's a different story.

The company was founded in 1993, when Japanese technology giant Pioneer Electronics decided to start an entertainment division in both Japan and America. While Pioneer Entertainment distributed tapes and LaserDiscs in a variety of genres, from music to documentaries, the company became best known as an anime producer and distributor. The company also became a major DVD supplier when the format became available. Titles first released during the Pioneer years included Tenchi Muyo!, Serial Experiments Lain, Last Exile and Trigun. They also did distribution for other companies early on, such as Funimation, Viz Media, Toei USA, and Bandai Visual.

In 2003, Pioneer decided to sell off its entertainment division. The buyer was another Japanese corporate giant — Dentsu, an advertising firm. They renamed the company Geneon, which is a portmanteau of the English words generate and eon. The new name was meant to signify innovation and longevity, which became bitterly ironic in light of what happened next.

Geneon USA began running into financial problems, despite being a popular and respected name among anime fans. Possible reasons for this included the increasing popularity of fansubs, the Dentsu deal resulting in Pioneer Electronics getting much of their early profits, mismanagement, over-saturation of the market, the anime boom dying, and the decline of home media sales. Whatever the explanation, by 2007, Geneon was in trouble. After an attempted alliance with ADV Films (who were having problems of their own) quickly fell apart, Geneon USA announced that they would cease manufacturing and distributing DVDs by the end of the year. This left several of its announced but uncompleted titles in limbo.

In 2008, Geneon negotiated Funimation to distribute their incomplete titles like Higurashi: When They Cry, Black Lagoon, Rozen Maiden, Shakugan no Shana, Karin, The Familiar of Zero, and others. Once that deal expired, all of Geneon's formerly licensed titles were all unlicensed and out-of-print, but many have since been rescued by other companies such as Funimation, Aniplex USA, Sentai Filmworks, Media Blasters, Discotek Media, and Viz Media.

Geneon's Japanese corporate parent continued to be one of that country's major entertainment producers and distributors; their properties included not only anime but several mainstream films from around the world, including America. In November 2008, Geneon Japan merged with Universal Pictures. The company is now known as NBCUniversal Entertainment Japan. That merger resulted in many former Geneon titles that Funimation had licensed being delayed.

In 2009, Anime News Network did a podcast

with former Geneon USA executive Chad Kime, who discussed Geneon America's decline. He said the reasons include anime series that failed (Heat Guy J cost as much as Fullmetal Alchemist but sold a fraction as much), budgeting for titles they did not own, and licensing new titles because their previous titles didn't make money.