Manga / The Law of Ueki 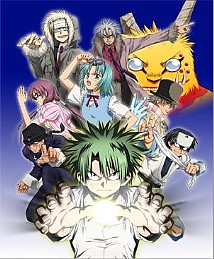 "The power to stick my fingers into a person's nose and make them fat!"
Advertisement:

The Law of Ueki is a manga series created by Tsubasa Fukuchi, which originally ran from 2001 to 2004 in Weekly Shonen Sunday. The story basically starts out when Ai Mori thinks that her classmate, Kousuke Ueki, is an alien. Not quite, but he does have the power to turn trash into trees and control them. This power was given to him by their teacher, a God Candidate involved in the Battle of the Supernatural Powers, a tournament to decide who will be the next god of Heaven.

Each God Candidate — a hundred in total — is required to choose a junior high school student to act as their fighter for some unspecified reason. Each candidate then bestows their chosen student with a certain power. Of course, every given power ranges from weird, near useless, potentially self-hazardous, to Awesome, but Impractical. The winning God Candidate will become the new boss of Heaven and the winning student will receive the Blank Zai (or talent), a talent that can be anything they choose.

Naturally, this leads many students to thoughts of greed and selfishness. Being The Hero, Ueki decides to take it upon himself to win this tournament to keep that power away from those that would abuse such a gift, fighting for justice with Mori Ai in tow. Along the way they meet not one, but two creepy major enemies, gather a loyal group of True Companions, stumble upon some sort of ancient heavenly conspiracy, and indirectly promote recycling and environmentalism (uh, well, sort of).

The manga was adapted into an anime, which aired for 51 episodes from 2005 to 2006. It also had a sequel, The Law of Ueki Plus (or The Law of Ueki+'"), which ran in Shonen Sunday'' from 2005 to 2007. Ueki and friends appear in the Massive Multiplayer Crossover game, Sunday VS Magazine: Shuuketsu! Choujou Daikessen.

The Law of Ueki provides examples of:

Alternative Title(s): The Law Of Ueki