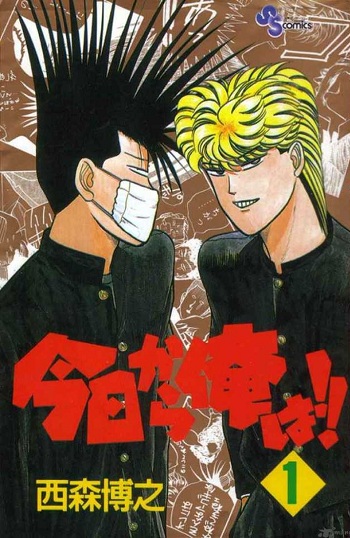 Left to right: Shinji Itou, and Takashi Mitsuhashi.
Kyou Kara Ore wa!! was a Shōnen gag manga that ran from 1988 to 1997. It revolves around two high school boys who decide to become delinquents after transferring to a new school. They meet for the first time on the day before school starts at a salon, where they decide to begin their image change with a new hairstyle, and so begins their journey to become the biggest delinquents Japan has ever seen!
Advertisement:

An animated adaptation was made in 1993, and live-action TV series is set to debut in 2018.

A later work of the mangaka is Cheeky Angel, which is very similar but also a bit of a deconstruction.