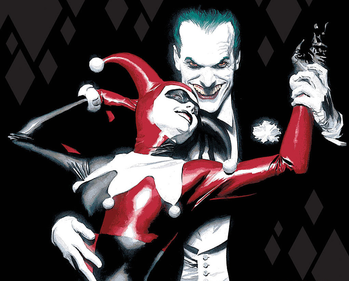 A match made in hell.
"Ursa: the only feeling you showed was for your vicious general; your only wish: to rule at his side."
— The Kryptonian Council, Superman II
Advertisement:

Bob's a villain. He's an evil, cruel, sadistic bastard. But no matter how many puppies he kicks, nuns he throws into open wells, or orphans he starves to death, Bob always has a girlfriend. Funny, huh?

The villain's paramour is almost always defined in terms of her (it’s usually a her) relationship to the villain. The role she plays in the plot, however, depends a great deal on how her character is defined. She may be just as evil as he is and actually share his goals. She could be a ditz who doesn't really like evil things but just isn't bright enough to realize she's in a relationship with a very bad person. In stories where the villain is allowed to be sympathetic on some levels (Grey-and-Gray Morality, Punch-Clock Villain, etc.), she might love him for his better qualities.

Depending on her skill set she might actually be a valued member of the villain's criminal organization, in which she might overlap with The Baroness or Dark Chick. If not, expect much grumbling from his underlings about why the boss even bothers to keep her around.

When her boyfriend is brought to justice or when the gang is being dismantled, this character runs a very high risk of being treated as an Accomplice by Inaction, regardless of her status in her boyfriend's entourage. And if her boyfriend is being targeted by a Roaring Rampage of Revenge for whatever reason, she will at best get turned in. However, if the boyfriend's eyes start wandering she may very well join the heroes in taking him down. In all other cases, she receives No Sympathy and is very unlikely to survive, even if she has children.

See Also: Perky Female Minion for a similar character (usually) without an explicit relationship and Unholy Matrimony for a couple that are each villains in their own right. A Lady Macbeth is generally older and goads her partner into committing evil acts. Sometimes subject to a High-Heel–Face Turn.

Compare The Mistress, Mafia Princess, Daddy's Little Villain. Contrasts Dating Catwoman when the love interest is on the opposite good/evil side, and Unholy Matrimony where the love interest is a full-blown villain in her own right and presented more as the villain's equal.