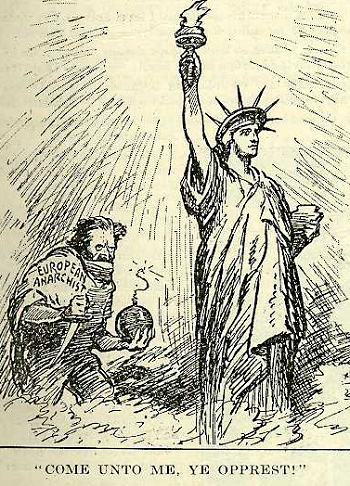 Mad Stan: BLOW IT ALL UP!
Batman: Keep it down, Stan. We're in a library.
Mad Stan: You think this is a joke? Look around, Batman! Society's crumbling! And do you know why?
Batman: Too many overdue books?
Mad Stan: Information overload, man! As a society we're drowning in a quagmire of vid-clips, e-mail, and sound bytes! We can't absorb it all! There's only one sane solution: BLOW IT UP!
— Batman Beyond
Advertisement:

Anarchism is an umbrella term for a bunch of views that advocate the reduction or elimination (or even simply ignoring) of hierarchic power and its replacement by various forms of voluntary non-hierarchical cooperation. Historically, many anarchists encourage nonviolent means for this goal.

Since the 19th century, after anarchism began to take form as a social movement, news, propaganda, and fiction have vilified anarchists as maniacs who simply want nothing but chaos, destruction, and anarchy for anarchy's sake. Anarchists often fill the role of Terrorists Without a Cause. This also tended to be the stereotypical image of communists for many Westerners until the "Orwellian intellectual infiltrating the government" image gained popularity starting in the 1940s.

The "bomb-throwing" image of the anarchist developed in the last quarter of the 19th century. Left-wing terrorism first made a serious mark in Tsarist Russia during the reign of Emperor Alexander II (r. 1855-1881), who, ironically, was targeted because he was a liberal(ish) reformist rather than an arch-conservative. The "Great Reform"

of the "Tsar Liberator"note Which included, among other things, the abolition of serfdom—hence the epithet "Liberator"—plus rationalization of the Russian judiciary and introduction of something resembling due process, introduction of the zemstva (partly-elected local government councils), educational reforms, and relaxation of censorship. The Tsar himself also indicated this was all just buildup to introduction of full constitutional semi-parliamentary monarchy in Russia, probably on the German and Austro-Hungarian model (in which the monarch wielded substantial but legally limited executive power). scared the pants off Russia's community of agrarian socialists (whose ideology was essentially anarchist, being heavily influenced by Mikhail Bakunin's anarcho-collectivism), who feared that the resultant improvements would sap support for their more radical agenda. In 1879, they established a loose organization called Narodnaya Volya or "People's Will", which started assassination attempts on various Tsarist officials, including several on the Tsar himself. They eventually succeeding in killing the Tsar in 1881 by literally throwing a bomb at him—well, two bombs.note The first bomb damaged the Emperor's bulletproof carriage, leaving him unharmed but forcing him to exit; the second, thrown at his feet, tore the lower half of his body to shreds. He was taken back to the Winter Palace, where he died of blood loss. This was highly publicized around the world (not that it did them much good domestically; the organization dissolved in 1884 and the Russian Left went into exile or hibernation for 20 years after the new Emperor Alexander III proved to be an unapologetic absolutist).

The tactics of People's Will attracted the attention of anarchists in the West, especially after the spectacular assassination of Alexander II, and some Western anarchist groups started taking pages from their playbook. The key moment for Western anarchist terrorism was the 1886 Haymarket Square riot in Chicago, where eight anarchists went on trial for a bomb that was thrown at a rally (they were not actually charged with throwing it, as some weren't even at the rally; instead they were charged with inciting the action, being influential anarchist figures in Chicago). Most people in the West had probably never paid much attention to one of the 19th century's many radical social movements before, but the sensationalized spread of the incident left a negative impression in media for a long time. The assassination of several heads of governments by anarchists during the following twenty years (most notably French President Marie François Sadi Carnot, Spanish Prime Minister Antonio Cánovas, Austrian Empress Elisabeth, Italian King Umberto I, and American President William McKinley) didn't help them either. During this period some anarchists advocated violent acts as "attentats" i.e. a means of drawing attention to their cause to spark a revolution by inspiring others, called "propaganda of the deed". Obviously, this backfired horribly, painting them as entirely depraved terrorists.

Often depicted with excess facial hair, or wearing a mask.

Traditionally equipped with a Cartoon Bomb, described by one stock image-hosting site as an "old-fashioned anarchist-style round bomb with burning fuse

." Modern depictions favor dynamite sticksnote Actually sort of accurate; one of People's Will's much-copied innovations was using dynamite as a tool of assassination and Molotov Cocktails.

Compare Mad Bomber, Dirty Communists, Ludd Was Right. For the right-wing version, see Right-Wing Militia Fanatic. See also Anarchy Is Chaos for an aversion. Contrast with Revolutionaries Who Don't Do Anything. For actual bomb-throwing as a weapon of choice, see Throw Down the Bomblet.