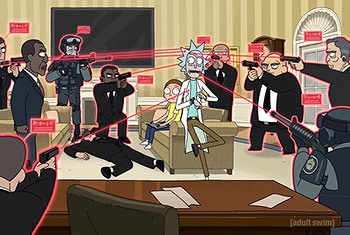 Rick and Morty help the President kill a monster.

" Ooh-wee! What a season! Sorry I never showed up, but I got married. I had a baby. I went back to school and got my G-E-E-E-D. What did you do while you were waiting? Hopefully you didn't just fuck around and waste your life. Ooh-wee! See you for Season 4 in, like, a really long time! I might even have a big white Santa Claus beard and and and a And a couple of grandkids and all that kind of stuff. See you-see you then!"