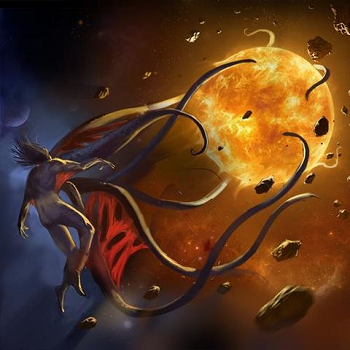 So you've got a star. Main sequence type, more or less middle of its life-cycle, nothing special. Probably has an inhabited planet or two orbiting it. Of course, the Evil (Space!) Empire wants the people on the planet(s) dead. They could just carpet bomb the planet or maybe even blow it up, but instead they decide to go for broke. When a faction or character goes Star Killing they go about ending a star's life in any of a variety of ways that dooms all life in the system to a Class X-2 Apocalypse How.

On the lower end of the scale, the sun may have the equivalent of food coloring added, changing the visible spectrum (and radiation) it emits, killing or weakening all life and/or sentients. This is the equivalent of changing Earth's sun from power-granting yellow to kryptonite green for Superman.

In the middle range of the scale, the sun could be "poisoned", such that it ages several billion years. This is frequently done by applying enough firepower to the sun to cause it to go supernova, but the other way—depleting the sun's hydrogen content and making it a cold dwarf star, or making it impossible for the sun to conduct hydrogen fusion—is also possible.

Finally, at the high end of the scale, the sun could be "collapsed" into a singularity (atypical for the mass of many suns) or "eaten" from the inside out by a singularity that is shot into it.

Interestingly, whatever means are used to kill the star might not harm any other stellar body it's aimed at. This is especially true for the "fusion-stopping" type poisons. If this poisoning takes long enough, the heroes may be able to apply a Magic Antidote, administer life-saving Solar CPR, or use an extremely powerful World-Healing Wave on the star. See also Unrealistic Black Hole.

Interesting: even though immediate aging of a star is extremely unlikely, it is theoretically possible to increase the speed of a normal star's aging. Usually, most matter within a star is a hydrogen/helium mixture, and most of the star's life cycle it fuses hydrogen into helium. However, a tiny part of the star's mass consists of carbon-nitrogen-oxygen, which transform into each other through the CNO cycle, catalyzing (i.e. accelerating) the burning of hydrogen. So, dump enough carbon or nitrogennote Not ordinary oxygen. Any time O16 appears in its ground state, that particular participant in the CNO cycle ends. into an average starnote The CNO cycle won't run at all if the star isn't massive enough to trigger catalyzed fusion in its core. It takes at least 1.3 solar masses for the CNO cycle to become its dominant energy source. The prime candidates for adding carbon or nitrogen would be massive, old stars that formed before the interstellar medium became enriched with heavy elements. and it probably will age faster AND burn hotter.note That may be the natural conclusion, but in Real Life, the opposite would happen. Upon the initial boost in fusion, the star would expand, slowing down the fusion reaction. Gravity would be weaker as well. A new stable equilibrium would be reached where fusion would occur at the slower rate sufficient to balance the weaker gravity. Stellar fusion would slow down. The effect won't be immediate, though. The mixing of star matter is slow, and distribution of additions will take many years, maybe even ages.

It is also theorized that there are additives that will catalyze proton decay or otherwise work faster in same way.note i.e. slower in the longer term And, if you talk about a civilization able to manipulate black holes, then by launching a small one into a star it can create an unusual object: a black hole in a dense cocoon of plasma, that will glow incredibly hot.

See also The Stars Are Going Out, which is about what happens when someone on Earth watches stars getting killed. Compare Earth-Shattering Kaboom, Planet Destroyer and Detonation Moon.