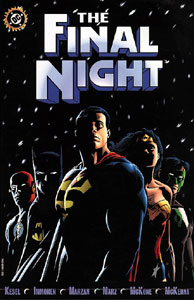 Final Night is a DC Crisis Crossover that published in 1996, that chronicles the day the sun went out, and the challenges Earth's heroes must overcome to Save the World.

The story begins with a Human Alien named Dusk, whose job is to warn planets about the arrival of the Sun-Eater, a cosmic entity that devours stars. Inevitably, the heroes of Earth try to prevent the Sun-Eater from, well, eating the sun. They don't succeed, and the world is plunged into darkness.

Our heroes now have to deal with the rapidly-decreasing temperatures and skyrocketing crime rate due to apocalypse panic, while the great minds come together to figure out a way to prevent The End of the World as We Know It.

The story as a whole is surprisingly down-to-earth, and far more believable than one would expect from a superhero tale about the sun getting extinguished. The story is arguably best known for featuring the death of Hal Jordan, the long time Silver Age Green Lantern who had controversially been turned into the insane anti-villain Parallax, sacrificing himself to save the world. This would then lead to Hal becoming The Spectre before his eventual return as a Green Lantern in 2004's Green Lantern: Rebirth.