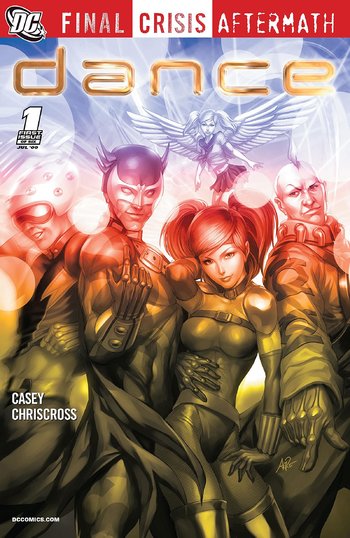 The cover for Dance.
Advertisement:

Final Crisis Aftermath was a DC Comics series of four miniseries spinning off from the events of Final Crisis. Each one deals with a different aspect of the fallout from that crisis.

In Run!, Michael Miller, the Human Flame, wakes up in a hospital to discover that his former boss Libra has fallen and he is now one of the most hated people in the multiverse. He thus goes on the run, desperately searching for an edge to protect himself.

In Dance, Japan's Super Young Team tries to capitalize on their role in saving the multiverse. Problem is, nobody really noticed them, so they hire a PR team to try and market them. Meanwhile, a sinister conspiracy is at work in their native Japan.

In Escape, Thomas Tresser, better known as Nemesis, is kidnapped and reprogrammed by the Global Peace Agency, who seek to use him to gather dangerous technology in the hopes of preventing another crisis.

And in Ink, Mark Richards, the Tattooed Man, tries to parlay his newfound status as an honorary JLA member to become a local hero in Liberty Hill.