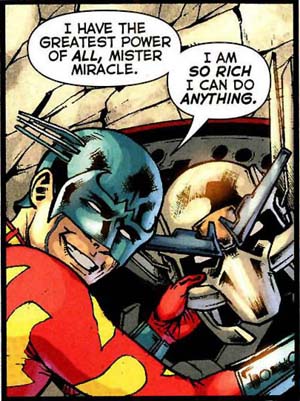 "The outfit says, "I am vengeance! I am the night!"...the smile says, "I'm rich, bitch!""
Barry Allen: What are your superpowers, again?
Bruce Wayne: I'm rich.
— Justice League
Advertisement:

Sometimes a character doesn't have to be bitten by a radioactive spider or sent to Earth from an alien planet to be a superhero. Instead, the hero needs only one thing: a lot of money (from just a low-end millionaire to high-end Fiction 500 billionaire levels).

Superheroes who don't live an "everyman" life often happen to be millionaire playboys by inheritance to explain where they get their neverending supply of gadgets, hideouts, vehicles, and Sidekicks. Instead of (or, quite often, in addition to) donating money to charity, they've decided to give back to society by dressing themselves in spandex and buying lasers and boomerangs with which to kick the ass of ne'er do wells. If they're a super-genius as well, this will be the result of patenting their brilliant inventions. But not anything that will effect lasting social change in the world, like a cure for cancer or an endless supply of food, because then writers couldn't do very special issues to address political/social problems of the week.

Super teams will often have at least one member who is a Crimefighter With Cash to explain how the team gets their Cool Ship and other assorted goodies; see The Team Benefactor. Often overlaps with Non-Powered Costumed Hero.

Frequently, but not always, overlaps with Badass Normal or Clothes Make the Superman. See also Rich Idiot With No Day Job. Might include simply bribing the bad guys to stop, see Cut Lex Luthor a Check. Contrast Money Is Not Power, where a person's wealth won't help them at all. A subtrope of Screw the Rules, I Have Money!