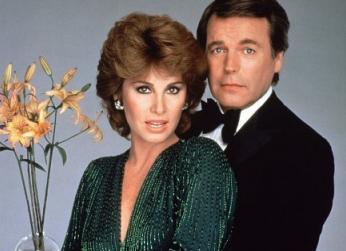 The Harts: When they met...it was moider!
"This is my boss — Johnathan Hart. A self-made millionaire! He's quite a guy. This is Mrs. H. She's gorgeous! She's one lady who knows how to take care of herself.note  this was changed to "What a terrific lady" in later seasons Oh, by the way, my name is Max, I take care of both of them. Which ain't easy! 'Cause when they met...it was murder!note In the first season, the final sentence was "'Cause their hobby is ... murder!" which gave an unintended impression."
— Max's Opening Narration
Advertisement:

Hart to Hart was an American television series that ran from 1979 to 1984 on ABC. It starred Robert Wagner and Stefanie Powers and was produced by Aaron Spelling.

The show focused on Jonathan Hart (Robert Wagner), a rich CEO, and his wife Jennifer (Stefanie Powers), a freelance journalist. In their spare time, the two pair up as amateur detectives, with some help from their butler Max (Lionel Stander). Each episode focused on a crime that they were currently trying to solve. Most of the cases they worked on dealt with murder, robbery, kidnapping, and espionage.

After five seasons on the air, the show was canceled due to low ratings in the last season. In 1993, the cast reunited to make eight made-for-TV movies.