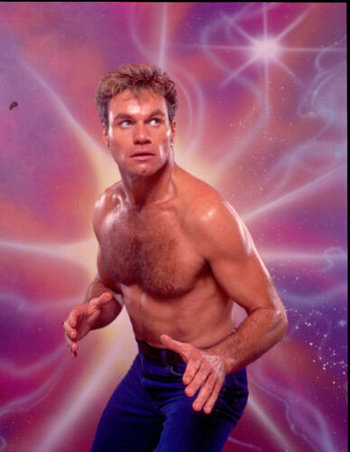 Jesse searches for a second chance... and a shirt.
Advertisement:

Hard Time on Planet Earth is a 13-episode comedic SF series. Produced by Touchstone Television, first aired on CBS in 1989 as a mid-season replacement.

The protagonist (Martin Kove) is a genetically-engineered elite warrior of an interstellar alien civilization. He has an excellent war record, but was unable to adjust to peaceful life, ultimately being apprehended for rebellion against the ruling council. The penalty for his actions is death, but in recognition of his previous heroic service, he is instead sentenced to exile on the primitive planet Earth, where he will exist in a human body and help the natives until he learns the value of restraint and compassion.

For the duration of the sentence, the exile is supervised by Control (Danny Mann) — a small CGI floating robot resembling a mechanical eye — who evaluates the exile's behavior, files regular reports, gives information about Earth (usually hilariously incorrect), and provides comic relief.

The exile falls in the middle of nowhere not too far from Los Angeles, breaks into a closed gas station, learns some English from TV and a children's picture-book, steals some work clothes with the name "Jesse", gets chased by police and rescues a woman who almost drove off a cliff. She thinks "Jesse" is his name, and he plays along.

In the first episode, Jesse is familiarizing himself with Earth and trying to recover a lost pendant that powers his body, while running from police. Next one has Jesse and Control inadvertently robbing an ATM and losing the money, then trying to return it. In subsequent episodes, Jesse usually gets some odd job, which inevitably results in him meeting people in need of his help.

The show never enjoyed high ratings, and was canceled after the 13th episode. Critics panned it for unoriginality and showing Disneyland. Still, it is fondly remembered by many among Generation X, most of whom saw it in their early teens.