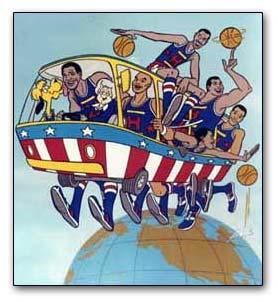 Hanna-Barbera produced this, the first of three Saturday morning TV series featuring the famous basketball comedy troupe, in 1970 for CBS. It was the first animated TV show to have a mostly black cast.
Advertisement:

The Globetrotters traveled in a van with their elderly coach, Granny, and their canine Team Pet, Dribbles. Most episodes, set overseas, had them on the way to their next game when they encountered a criminal or other interference. Despite trailing badly in the first half of the game, the Globetrotters always managed to come from behind in the second half.

Their two other shows were The Harlem Globetrotters Popcorn Machine (live-action variety show), also on CBS, in 1974, and The Super Globetrotters on NBC in 1979. In the 1977-78 midseason, NBC replayed episodes as part of the two-hour Go-Go Globetrotters umbrella title (which included elements from that season's CB Bears, plus The Herculoids, Space Ghost and Motormouse and Autocat). They also appeared in 1979 on Fred & Barney Meet the Shmoo in a four-part story arc, The Harlem Globetrotters Meet Snow White.

The entire show was later parodied in several episodes of Futurama.