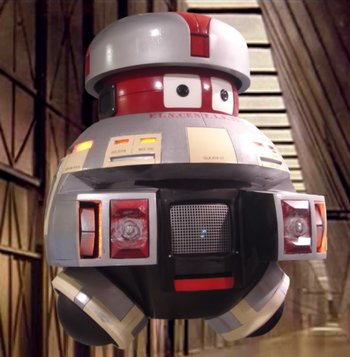 One alternative to having bipedal, human-shaped robots is the minimalist approach. If they can float via Artificial Gravity or some unknown phlebotinum, then they can dispense with the torso and the legs and all those other messy, mechanical parts. All they need is a casing for their processor and a floating thingamajigger. A visible face is optional; more common is a single glowing "eye" with Unusual Eyebrows around it.

That's the way the logic goes, anyway. Some of these are more complicated for various assorted roles: they may have weapons or tools or arms attached. Sometimes they'll be expanded to a full-blown robot torso, only with antigravity instead of legs.

The "floating head" version is usually a sidekick or a Robot Buddy if on the protagonist's side, since the small size lends itself well to comic relief. On the opposing side, expect it to be higher up; often it's the Big Bad. The lack of hands and AI nature often means that its additional role will be The Cracker.