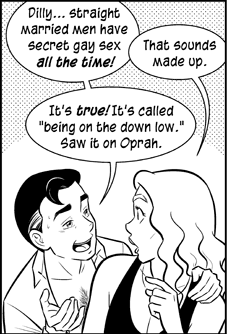 Some things you really shouldn't learn from Oprah. Especially misquoted Oprah.
"In the Mushroom Kingdom
I'm the finest Doc by far
I got my degree by watching
House and Scrubs and ER"
— Brentalfloss, "Dr. Mario With Lyrics"
Advertisement:

A character who you wouldn't normally expect to be a source of knowledge reveals, often in excruciating detail, important facts that help your group achieve their aims. Perhaps he can identify lethal plants in the the wild, or can tell an odd symptom of disease that throws light on a murder mystery. Everyone's impressed, but skeptical of where he gained this new-found logic.

Easy: he saw it on Discovery Channel once.

A common way to add information to a scene, while letting the designated idiot play The Smart Guy for a change. Plus it delivers the important message that watching TV is good. It's not always documentaries, of course, and they can still make mistakes if they copy near realistic TV shows, such as CSI, when they aren't as realistic as they appear.

Naturally, this is Truth in Television, in more ways than one. (Note, though, that there are many cases where Television Is Trying to Kill Us, so when in doubt, Don't Try This at Home.)

In the event that the character learned what they know from television through repeated viewings, see Saw "Star Wars" 27 Times. May sometimes stem from Endangering News Broadcast.

Compare Suddenly Always Knew That, Saw It in a Movie Once, I Know Mortal Kombat, Some Day This Will Come In Handy. See also ...Or So I Heard, when this doubles as a Suspiciously Specific Denial. Learnt English from Watching Television is a language-specific subtrope.