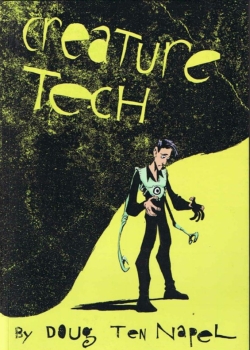 Creature Tech is a comic book produced by Image Comics, written by celebrated author Doug Tennapel, that takes Rule of Symbolism to the max.

Dr. Michael Ong, former seminarian-turned-athesist-scientist, is assigned to a government warehouse in his hometown which the locals have dubbed Creature Tech. Ong's job is to categorize boxes of mysterious artifacts, as the government doesn't know what to do with the artifacts. Unfortunately, Jameson, an English ghost, is after one of the boxes, which contains the Shroud of Turin. Ong and company have to stop Jameson before he enacts his fiendish plan to resurrect a giant space eel.