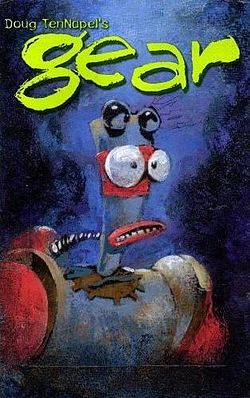 My upper eyes see into heaven, my home.
Gear, sometimes written as GEAR, is the first graphic novel by Doug TenNapel, originally published by Image Comics and Fireman Press Ltd. in black and white, running six issues from 1998 to 1999. It was reprinted as a trade paperback in 1999, and then again in full color in 2007.
Advertisement:

The plot revolves around an animal war between the South Plate Insects, the North Plate Cats (who have descended from the Newton Cats, yet, refuse association with them), the Dogtown Dogs and the Newton Cats. The four states do battle with ancient giant battle robots known as Guardians. Having only one Guardian so old it barely functions, Newton sends four less-than-competent misfit cat brothers known as Gordon, Simon, Waffle and Mr. Black to hijack a new one from their enemies.

Was very, very, VERY loosely adapted into a much Lighter and Softer short-lived Nicktoon called Catscratch in 2005. The only remnant of the original comic was the three main cats, Gordon, Waffle and Mr. Black (whose name was changed to Mr. Blik) as the focus, although it was originally planned just to be a more Nickelodeon-audience-friendly adaptation of the comic. Though some people remember Catscratch, the source material is practically unknown outside TenNapel fans.