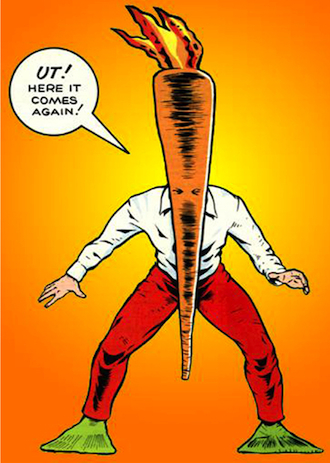 Flaming Carrot is a Super Hero created by Bob Burden. The character first appeared in Visions #1 (1979), the yearly Atlanta Fantasy Fair publication. He made regular appearances there to 1987. Burden self-published the one-shot Flaming Carrot Comics #1 (1981). But the real launch of the character took place when Dave Sim of Aardvark Vanaheim decided to hire Burden, launching Flaming Carrot Comics as a regular series. The series changed publishers a couple of times, running for a total of 31 issues (May, 1984-October, 1994).

During its run, the Carrot also appeared in anthology titles, mini-series and a couple of crossovers, notably with Cerebus and the Teenage Mutant Ninja Turtles (Mirage). Since Burden owns the character, any publisher doing business with the creator has access to him. Since 1994, reprints, mini-series, and crossovers have kept appearing. The Carrot's superhero group, the Mystery Men, have at times appeared without their most famous member, and even had a film based on them.

The Flaming Carrot has an origin similar to that of Don Quixote. Alonso Quijano constantly read Chivalric Romances; the habit drove him insane, giving him the delusion of being a vagrant knight. The Carrot, real name unknown, read 5,000 comics in a single sitting; the experience caused him brain damage and turned him into a superhero, just like the protagonists of those comics. He went to acquire a costume, gadgets, and a distinctive mask. Which depicts a giant carrot, extending from above his head to below his crotch. It’s perpetually on fire. He never seems to take it off.

The Carrot patrols Palookaville, a decaying section of Iron City. The City itself is described as a midwestern steel town that has seen better days. He works alongside Police Inspector Keene and the Mystery Men, other bizarre vigilantes. His speech patterns, a tendency to drop pronouns and articles when excited and often "going into long, rambling, stream-of-consciousness rants" tends to confound his opponents.