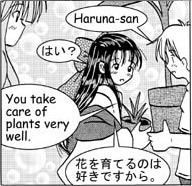 For whatever reason, two or more characters can't speak the others' language in anything better than heavily mangled, imprecise gobbledygook. However, all involved can understand the others' language when spoken. This results in unnervingly cool, creepy, or cantankerous scenes depending on the set-up, as you have two people listening and responding to each other in completely different languages, creating a Bilingual Dialogue (and sometimes acting as interpreters to any third parties present).

What you end up with is a conversation that goes something like this:

Annette: La plume de ma tante est sur le bureau de mon oncle.note My aunt's pen is on my uncle's desk.
Benny: Oh, I'll go get it, then. Do you want anything else while I'm up?
Annette: Non, merci, c'est tout.note No thanks, that's all.
Advertisement:

This is Truth in Television, and is technically known as Receptive or Passive Bilingualism. If one learns a foreign language by speaking it (as is common in many schools which use a listen-and-repeat teaching format), rather than by learning to read it, it is easier to passively understand what someone else is saying than to actively generate the language oneself. If each person understands the other's first language, it's easier to use this type of conversation than for one person to struggle to speak in a more uncomfortable second language. However, the same result can also happen when the opposite approach is taken (with each person speaking the language they're less comfortable in, because it's easier for a fluent/native speaker to understand a limited, pidgin version of the language than it is for someone with minimal knowledge of the language to understand complex sentences with uncommon words).

The trope may also be Justified in a Science Fiction setting by the idea that different species lack the vocal apparatus to speak each others’ languages (but evidently speak in frequency ranges that are mutually audible), or by some kind of limited Universal Translator technology. Still, carried to excess (and without the universal translators), it can lead to the impression that everyone understands (but doesn’t speak) every known language, which is a bit implausible, especially in, say, a galactic civilization. A multilingual culture will often develop a Common Tongue for a reason.

Antonio Converses with a Bird

Antonio has a conversation with a toucan. Oddly for a Disney movie, he does not hear animals talking despite being able to understand them.

Antonio Converses with a Bird

Antonio has a conversation with a toucan. Oddly for a Disney movie, he does not hear animals talking despite being able to understand them.