Film / The Beat That My Heart Skipped 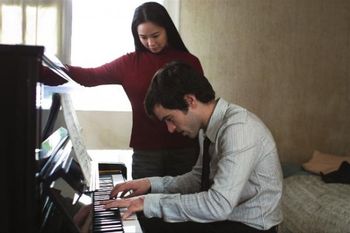 The Beat That My Heart Skipped (De battre mon coeur s'est arrêté) is a 2005 drama film directed by Jacques Audiard. It's a loose Foreign Remake of the 1978 American film Fingers by James Toback.

Thomas "Tom" Seyr (Romain Duris) is an angry young man. Having followed in his father's footsteps in the world of shady real estate deals, he hates himself for what his job makes him do, but he can't find the resolve to escape his father's influence. However, his late mother was a concert pianist, and he inherited from her a talent for classical music; one day, he chances upon her former impresario, and decides to reacquaint himself with the piano.

In order to practice, he takes lessons with a recently arrived Vietnamese woman pianist, Miao-lin (Linh Dan Pham), and gradually reawakens his long-dormant skills. But the world of fast and dirty money isn't one that can be easily left behind.