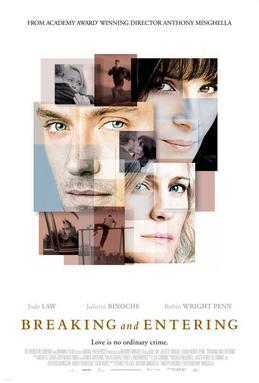 Breaking and Entering is a drama film written and directed by Anthony Minghella.
Advertisement:

Will Francis (Jude Law) is a landscape architect living in London with his Swedish-American girlfriend Liv Ullman (Robin Wright) and her adolescent autistic daughter Bea (Poppy Rogers), a talented gymnast whose increasing difficulties with sleeping and eating are putting a strain on Will and Liv's relationship. The offices of Will and his partner Sandy (Martin Freeman) are repeatedly burgled by fifteen-year-old Mirsade "Miro" Simic (Rafi Gavron) and his friend Zoran (Ed Westwick), who work for a ring of Bosnian-speaking criminals. One night Will catches Miro in the act and follows him to his home, where he lives with his mother Amira (Juliette Binoche), a Bosnian Muslim who fled Sarajevo with him after his Serbian father was murdered in the Bosnian War. Rather than turn Miro in, Will begins an affair with Amira.

Breaking and Entering contains examples of: