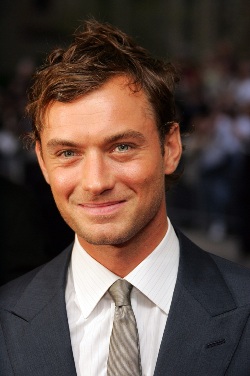 "I don't want to do anything that I'm not passionate about."
Advertisement:

He began acting with the National Youth Music Theatre in 1987, and had his first television role in 1989. After starring in films directed by Andrew Niccol, Clint Eastwood and David Cronenberg, he was nominated for the Academy Award for Best Supporting Actor in 1999 for his performance in Anthony Minghella's The Talented Mr. Ripley. In 2000, he won a Best Supporting Actor BAFTA Award for his work in the film. In 2003, he was nominated for the Academy Award for Best Actor for his performance in another Minghella film, Cold Mountain. He is also known for his role as Dr. John Watson in the Sherlock Holmes film series alongside Robert Downey Jr. as Holmes. In 2017, he was cast as Albus Dumbledore in the Harry Potter Prequel series Fantastic Beasts.

In 2006, he was ranked as one of the top ten most bankable film stars in Hollywood. In 2007, he received an Honorary César and was named a Chevalier of the Ordre des Arts et des Lettres by the French government

Not to be confused with Jennifer Lawrence who somehow got the nickname "J-Law" contrary to Jude's existence.