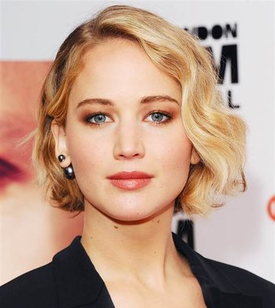 Jennifer Shrader Lawrence (born August 15, 1990 in Louisville, Kentucky) is an Academy Award–winning actor. Her first big role was in the sitcom The Bill Engvall Show on TBS which ran from 2007 to 2009, where she played the eldest daughter, Lauren. In 2009, she got the lead role in the drama Winter's Bone and received an Academy Award nomination for Best Actress, later winning for Silver Linings Playbook, the second-youngest Best Actress Oscar winner (after Marlee Matlin for Children of a Lesser God). She achieved worldwide fame after being cast as Katniss Everdeen, the heroine in the film adaptation of The Hunger Games, the first of a popular Science Fiction Young Adult book trilogy by Suzanne Collins. In 2013, she appeared in American Hustle and received her third Oscar nomination as well as winning her second Golden Globe (having previously won for Silver Linings Playbook) and first BAFTA.

She's the youngest female actor to have four Oscar nominations (three for Best Actress and one for Best Supporting Actress) and according to Forbes magazine in 2014 she's the 2nd highest paid female actor in modern Hollywood, with a paycheck of $34 million.

Tropes referenced by her work: