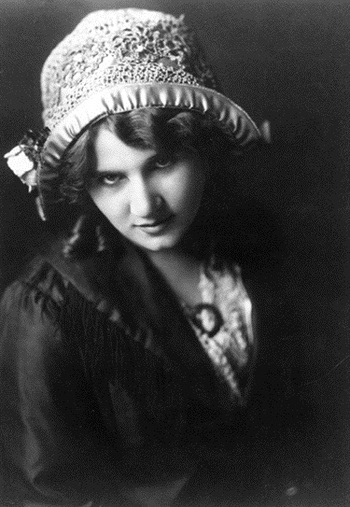 Florence Lawrence (January 2, 1886note Incorrectly identified as 1890 on her grave marker – December 28, 1938) was a Canadian-American actress and one of Canada's film pioneers. She is often referred to as "The First Movie Star", as she was one of the first film actors to be publicly named and credited for her roles. She appeared in almost 300 films for various motion picture companies throughout her several year career.

Born Florence Annie Bridgwood in Ontario, Canada, Florence was the youngest of three children. Her parents were an English carriageman and an Irish vaudeville actress.

At the three years old, Florence made her stage in a song and dance routine with her mother. She later began laying with her mother's company, the Lawrence Dramatic Company, however her mother dropped her once the sadness of the play's began affecting her mood. By six Florence was nicknamed "Baby Flo, the Child Wonder". After the death of her father in 1898, Florence and her family moved to New York to live with her maternal grandmother. Florence's mother then decided to stop bringing her kids on-stage with her and enrolled them in school. After graduating, she rejoined her mother's drama company but soon later ended up moving to New York City with her mother after the company disbanded.

In 1906, Florence repeatedly tried and failed to get on Broadway. In December of that year, she was hired by the Edison Manufacturing Company to play Daniel Boone's daughter in the film Daniel Boone; or, Pioneer days in America due to her ability to ride horses. This role led Florence on her way to becoming a popular actress.

In 1907 alone she appeared in 38 movies for the Vitagraph film company. Her first Vitagraph role was Moya, an Irish peasant girl, in a short adaptation of The Shaughraun. Florence later briefly returned to stage acting in Melville B. Raymond's Seminary Girls but she disliked life on the road and returned to film in 1908.

After success in The Girl and the Outlaw, Florence Lawrence began appearing in various films by director D.W. Griffith. Florence quickly became a popular actress but due to actor's names being credited her fans didn't know her name. Biograph Studios refused to publicly announce her name and so fans simply dubbed her "The Biograph Girl".

Florence became well-known for her work in Resurrection, the Jones series, and various dramas alongside co-star John R. Cumpson. When Florence and her husband Harry Solter both began looking elsewhere for work with the Essanay Company, Essanay ended up reporting them to Biograph's head office, which resulted in both actors being fired. In 1909 they ended up joining the Independent Moving Pictures Company of America.

Carl Laemmle, the president of the company, organized a publicity stunt by starting a rumor that Florence had been killed by a street car in New York City. Then, after gaining much media attention, he placed ads in the newspapers that announced, "We Nail A Lie", and included a photo of Florence and an advertisement saying she was acting in the new film The Broken Oath. Florence later made a personal appearance in St. Louis, Missouri to show that she was alive. Carl later stirred up more attention by falsely claiming that Florence's fans were so excited to learn that she was well that they rushed her and ended up tearing her clothes off.

Persuaded to return to work in 1914, tragedy struck Florence Lawrence while filming the Universal film Pawns of Destiny in 1915. When a staged fire got out of control, she received serious burns and fractured her spine in a fall. Months later she returned to work, but collapsed after the film was completed. Florence blamed her husband for the incident and divorced him. Universal refused to pay her medical expenses, but despite her feelings of betrayal Florence continued to work for the studio. The strain was too much for Florence, resulting in her becoming completely paralyzed for several months. In 1921, she traveled to Hollywood to attempt a comeback, but to no success. Her roles past 1924 are all uncredited bit parts.

During the 1920s, Florence and her second husband, Charles Woodring, opened a theatrical cosmetics store in Los Angeles called "Hollywood Cosmetics". In 1933, Florence married her final husband, Henry Bolton, but he was an abusive alcoholic. Their marriage lasted less than a year.

After her acting career fell through the wayside, Florence's luck didn't change much. She lost much of her fortune due to the stock market crash and ensuing Great Depression. In 1931 she was forced to close her cosmetics store due to poor business caused by the Depression. In the late 1930s, Florence (along with several other silent stars who couldn't make it after films turned to sound) signed up with MGM for bit roles. In 1937, Florence was diagnosed with anemia, depression, and a bone disease now speculated to be either myelofibrosis or agnogenic myeloid metaplasia.

Florence died on December 28, 1938 by self-inflicted poisoning. She left a suicide note addressed to one of her roommates.

Florence was buried in an unmarked grave in the Hollywood Forever Cementary. It remained unmarked until 1991, when an anonymous actor paid for a marker. The marker, however, is inaccurate as it says Florence Lawrence was born in 1890, not the correct 1886. Her death certificate also has the same error, which is attributed to Florence having lied about her age.