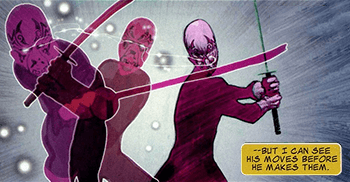 "He who sees his own doom can better avoid its path.
He who sees the doom of others can deliver it."
— Eldrad Ulthran, Warhammer 40,000
Advertisement:

Sometimes, the most powerful fighter will not be equipped with such Stock Superpowers as super-strength, or Nigh-Invulnerability. Instead, they have the power to see into the future.

Why is this useful? Because it lets them know your next move, and plan accordingly. Being able to see even a few minutes into the future can be a huge advantage in a fight and can let someone get the edge over opponents that might have more skill or experience and just the shock of having their moves foreseen can cause them to slip up and make mistakes. However while it can give a big advantage in a fight there are generally two logical weaknesses that can let people overcome this ability.

The first is by simply being so much stronger and faster than your opponent that they can't react or defend against your attacks. After all, it doesn't matter if your opponent knows what you're doing to do next if they physically can't stop you or protect themselves from you. The second is setting up a scenario that's basically the same as the first by simply outlasting your opponent and waiting for them to be too injured or tired to keep up with you and unable to defend against you.

For the second strategy, having Super Toughness or being Made of Diamond would be a must because it doesn't matter if they can keep hitting you if they don't have the power to hurt you. In some instances you could also hit them with something that can't be avoided because they won't have time to get outside of the radius before it arrives. This typically requires knowing that they have the power and being able to plan around it. For example, if they can see five minutes into the future, using an invisible, odorless Deadly Gas that kills its victims about ten minutes after exposure.

Why this doesn't muddle up their ability to know what you're doing now can be chalked up to the Rule of Cool. Alternately, it can be Hand Waved by saying that they're not looking that far into the future, or by noting their brain can keep up with both.

Is often accompanied by Spider-Sense, which warns the user of vague danger instead of predicting specific attacks.

Compare Kung-Fu Clairvoyance where the hero seems to have this, but it's not canonically one of their abilities. Contrast with Super Reflexes, which is simply being able to quickly react to attacks as they happen, not before.

Not to be confused for Calling Your Attacks, which is about calling out the names of your own attacks as you do them.

Partycrasher's defining ability is to predict his opponent's moves, making him one of Hawk Moth's most efficient villains ever.

Partycrasher's defining ability is to predict his opponent's moves, making him one of Hawk Moth's most efficient villains ever.