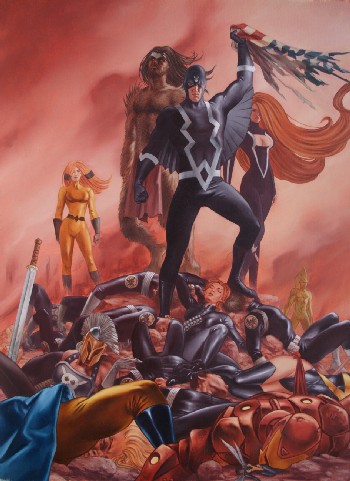 Don't let this cover fool you: America Saves the Day

Silent War was a 2007 Marvel Comics limited series, about the war of The Inhumans against the United States.

Previously, with the Inhumans: At the end of the House of M crossover Quicksilver lost his powers, along with most of the mutants. In Son Of M he was rescued by Crystal of The Inhumans, his former wife, and taken to Attilan, where he stole the terrigen crystals, the source of the inhuman's powers, in a bid to restore his own. It didn't work well: he didn't recover his super-speed, but got instead the power to go forward in time and return. His daughter Luna, who didn't have powers, got the power to "see" the evil or emotions of others. The ex-mutants exposed to the mists mutated horribly. And before the Inhumans could recover the terrigen crystals, the US army secured them. Black Bolt then declared war to the US.

The story begins with Gorgon leading a small team to a theater play, trying to reveal to the public what was going on. The "Do Not Adjust Your Set" number soon turns into a terrorist attack when one of them, Jolen, kills a number of people; Gorgon and the others are defeated by the Fantastic Four and captured. A scientist tests the terrigen mists on Gorgon, exposing him to it a second time, making him look more bestial. He momentarily breaks free, exposing the scientists to the mists in the process. Meanwhile, things aren't going great in Attilan. Black Bolt and Medusa's marriage is getting increasingly strained, and the Inhumans are seeking revenge for their captives.

The Inhumans try to retrieve the Crystals, but Reed Richards had prepared a defense that takes them somewhere else, where the Sentry is waiting. He refuses to fight Black Bolt, explaining the concept of Mutually Assured Destruction, but tells him while the US might release Gorgon eventually, they'll never give up the crystals.

With the crystals at the Pentagon a no-go, they visit Quicksilver, only to find that the crystals he took have become embedded in his body. He warns them that in a jump forward he saw an explosion in the moon, at the location of Attilan. Appalled at what he's done, Medusa tells Pietro if they see him again, they'll kill him, and Crystal informs him they are officially annulled. Back in Attilan, Maximus gets a visitor in his cell - Medusa.

The queen of the Inhumans is baffled by her own acquiescence to Maximus, who should be powerless, as she thinks about the fate of Ahura, locked away by the genetics council of Attilan for apparently being too much like his uncle. Medusa and Maximus kiss... and Black Bolt sees. Back down on Earth, Professor Cartwright is approached by Maria Hill, who tells him the president wants to try the mists out on marines. Cartwright informs her there's a snag to using them on humans - exposure is certain death. He only has a day or two at most. A squad of marines, all with no families or loved ones to miss them, are recruited and exposed.

At Attilan, Black Bolt returns with a plan of action: The Inhumans attack. just the Inhumans teleport again, not to the Pentagon itself but near it, and proceed from there. Sentry holds back from fighting, as the Inhumans manage to free their captives and recover the crystals from Professor Cartwright, though not out of any mercy on his part. Meanwhile, under Attilan, Medusa brings Luna to Maximus' cell. Despite Luna's misgivings, she's forced to use her powers on Maximus, letting lose what was caged in his mind...

With the president's trust in the Avengers shaken, the empowered marines are sent to the moon, to attack Attilan, while elsewhere, Maximus is freed (actually, he'd managed to get his guards to let him out hours before). Restoring Ahura, Luna notes that he has the same thing in his head as Medusa. It's a mind-virus Maximus put there years ago, all his little fun. Then Maximus heads out to watch the fireworks. When the first marine dies, all the others surrender, but Luna sees one of them is different from the others. Maximus realises what's going on - she's been turned into a suicide bomb. Once the marines are inside Attilan's dome, she goes off.

With the Inhumans shocked and beaten, Maximus quickly seizes control, in all senses of the word. With Medusa by his side, he vows to his people that they will rebuild, and then... Earth is theirs. Elsewhere, Luna finds her uncle and apologises for causing everything.