The Bus Came Back 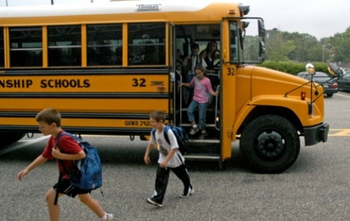 Only two more seasons until they're back on the bus again.
"After months and months of rumors, flat-out denials, and almost certainly some begging by the producers, Michael Rosenbaum has agreed to reprise his role as Lex Luthor for the series finale of Smallville. When asked why he finally relented after refusing to return for so long, the actor explained that someone reminded him he was Michael fucking Rosenbaum, and what the fuck else did he have going on."
— Rob Bricken

After a main character gets explicitly written out of a story, we often never see them again. This trope is about when they return once again, to work with the current main characters.

This works several ways: we may get to find out what they've been up to, and then they go back to whatever it was; or it's used as a way to advance their character development even though they're no longer on the show. At the end of the episode, the character generally ends up on a different, longer bus.

In rare cases, the character in question returns for good and resumes their major role. This can happen when the character's been an Ensemble Dark Horse and the authors are either trying to fix the removal that was controversial in the first place, or simply attempt to win some favors from the fans. In this case the character has all the chances to turn into a Spotlight-Stealing Squad. Or it might be that it's the show with a lot of characters and this particular one simply was Out of Focus, if maybe a bit too long. It may also occur when an actor recovers from an illness, finishes work elsewhere or when legal issues are resolved. Actresses who go on maternity leave may have their characters Put on a Bus only to be written back in once the actresses are ready to return.

Often The Bus Came Back is invoked as part of Gondor Calls for Aid, where the main characters bring characters back from the bus to help in a dire situation. Sometimes this even involves bringing back former villains to fight against the current Big Bad, because Even Evil Has Standards. If the returning character suddenly has a new personality or a new actor from the one showcased before, it's respectively either a case of Not as You Know Them or The Other Darrin.

Compare with Commuting on a Bus, where a former major character turns into a recurring guest character (regularly getting on and off a bus). If the character takes the bus and returns in the very same episode (or, despite his plans, never manage to actually take the bus), then he was simply With a Foot on the Bus. Back for the Dead, which is the subtrope where the character dies at the end of the return episode; and Back for the Finale, where a character returns expressly for a show's final episode. Also compare Plot Archaeology, when this trope is applied to an entire story arc. If, on the other hand, a character never comes back even though it'd be easy for the character to return for at least one episode, then it's a Long Bus Trip.

Not to be mixed up with He's Back!, which is when a mainstay character recovers from a personal crisis.