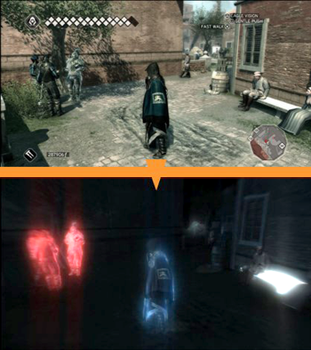 It's like using every sense at once, isn't it? To see sound and hear shapes.
Advertisement:

The ability to perceive normally invisible Life Energy of others, often colour-coded for good/evil, emotions, amount of life, Power Level, etc. Often presented as an advanced form of Ki Manipulation, but can also be attributed to Functional Magic, Psychic Powers, spirituality, or sufficiently advanced technology.

Auras can be seen as a glowing outline or coloring on a character's skin. For extra clarity, the character/Monster of the Week's vision may be shown in black and white to make the auras more distinctive.

Supertrope of Detect Evil. Sister Trope of Enemy Scan and The Force Is Strong with This One. When the Aura is representative of something else, see Editorial Synaesthesia, Power Glows, Fluorescent Footprints or Battle Aura. Compare to Vein-o-Vision, which shows the heart rate and blood pumping inside a body.

Not to be confused with actual auras, which are visual or neurological aberrations that occur before the onset of a migraine.

For other information displays within a person's field of view, see HUD, Stat-O-Vision, and Infrared Xray Camera.