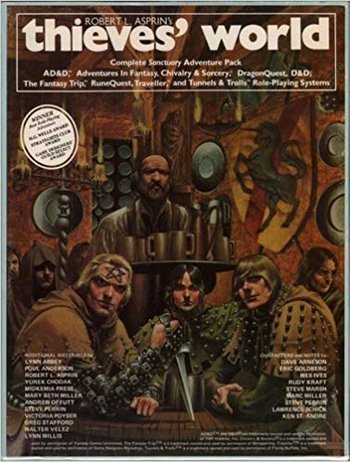 Thieves' World is a dark urban fantasy Shared Universe created by Robert Asprin in 1978 and mostly focused on the city of Sanctuary. It drew in authors like Poul Anderson, John Brunner, Andrew J. Offutt, C. J. Cherryh, Janet Morris and Marion Zimmer Bradley (with the first Lythande story) to contribute, and generated a buttload of books (12 short story compilations, 8 official novels, some graphic novel adaptations of the compilations and roleplaying adaptations from the likes of Chaosium and FASA) before it went on hiatus in 1989.

Then in 2002 Lynn Abbey published a new novel in the universe, Sanctuary which re-started the series several decades later. Two additional anthologies were published, as well as D20 books from Green Ronin.

The stories by in large focus on the poorer and nastier inhabitants of Sanctuary, a desert town on the edge of the Rankan Empire. It is implied that a good amount of the conflict in many of the stories is the result of the struggle between the warlike Rankan gods and the Ilsigi ones they displaced when they took over. Later in the series, the city is reconquered by a new group - the snake-worshipping Beysib - which adds another faction to the divine squabbling already going on.

Not to be confused with the term for the Russian Underworld during the Tsarist era (Воровской Мир Vorovskoy Mir in Russian).