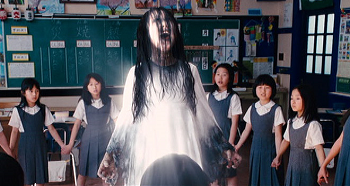 Hold, Alduin on the wing! Sister Hawk, grant us your sacred breath to make this contract heard! Begone, World-Eater! By words with older bones than your own, do we break your perch on this Age and send you out! You are banished! Alduin, we Shout you out from all our endings unto the last! YOU! ARE! BANISHED!
— Felldir the Old, The Elder Scrolls V: Skyrim
Advertisement:

Companion to the Holy Hand Grenade, stronger than Turn Undead, and opposite of the Summoning Ritual; the Banishing Ritual sends evil somewhere else where it will at least take a while to get back. This is usually the preferred choice when the Balance Between Good and Evil means killing evil makes things worse, or Fighting a Shadow doesn't send it away long enough, or when the thing is simply hard to kill.

The mechanics of the Banishing Ritual may simply be the Curse Escape Clause or counter curse to the Summoning Ritual; or a reminder to the universe that the Eldritch Abomination or The Legions of Hell don't belong on this plane. Can be the start of or continuation of Sealed Evil in a Can. Technically, sending something to Another Dimension is "banishing", sealing something up while still in this one is "binding."

Sealing Ritual: A similar ritual that is used for sealing something, instead of banishing it to another place. The net effect is the same, although in the case of sealing, the something is still "around". Will lead to the whole Sealed Index in a Can.