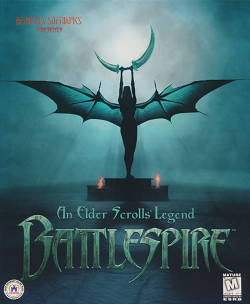 "After a disorienting trip through both time and space, you enter the Battlespire..."
"I recall the story of the recovery of the Battlespire as it was told to me by the son of Old Chimere, these many years ago. How the legions of daedra Lord Mehrunes Dagon overran the spire aided by betrayal. How a young hero from obscure origins entered the Battlespire, proving ground and testing facility for the shadow legion, the imperial guard, and finding his test was more than he bargained for. Thinking this was only a harmless test of his skills, he enters the spire through the pillar of light and finds a hell created by the betrayal of the legion and the perfidy of Jagar Tharn, arch-traitor to the empire. And so our story begins..."
Advertisement:

Originally conceived as an Expansion Pack for Daggerfall, Battlespire takes place one year before the events of Arena. The Imperial Battlespire, located in the "Slipstream" between the mortal plane (Mundus) and the void of Oblivion, is the training grounds for the elite Imperial Battlemages. You play as a recruit who, on the final day of your training, finds that the Battlespire has been invaded by the Daedric forces of Mehrunes Dagon, the Daedric Prince of Destruction. Many are dead and your partner has been taken captive. You must fight through the various levels of the Battlespire (and a few realms of Oblivion) in order to rescue your partner and stop the invasion.

Battlespire includes Bethesda's first attempt at a multi-player mode. However, it proved such a spectacular failure that it wouldn't be attempted again until The Elder Scrolls Online nearly 20 years later.

Reviews were predominantly negative, with technical issues abound (such as the infamous multi-player mode) while fans of the main series were disappointed in Battlespire's lack of freedom and exploration compared to the main series.

However, Battlespire did much to expand the lore of the Elder Scrolls universe. In particular, a good portion of the information known about the Daedra originates in this game.