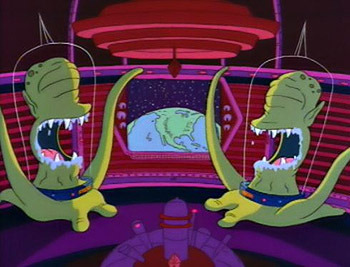 "For a superior race, they really rub it in."
"Pathetic Earthlings, hurling your bodies out into the void, without the slightest inkling of who or what is out here. If you had known anything about the true nature of the universe, anything at all, you would've hidden from it in terror!"
— Ming the Merciless, Flash Gordon
Advertisement:

Humanity is just plain less cool than the other sapient peoples of the universe. By any standard one cares to choose, aliens of any type are greater than or equal to humanity, with the occasional weak point, often due to their Bizarre Alien Biology.

This makes sense in the case of aliens landing on Earth; you have to be pretty self-assured in your own abilities to risk landing on a rock dominated by near-hairless apes with nuclear weapons and a history of murdering each other for any number of reasons. One would assume that a weaker alien — at least one without massively compensatory technology — would just keep right on flying, and go land on a planet full of Smurfs.

Even in Space Opera, where humans do most of the landing, it's rare to encounter a species that is inferior to humanity in all ways; the Cargo Cult are usually not advanced technologically or mentally, but they may very well be stronger and tougher than their so-called god.

In comics, nearly every alien is outright superpowered. Of course, almost all major characters in mainstream comics are super, so that's not so illustrative.

This is also a staple of Tabletop Games and other fantasy games, where humanity is almost always the "Middle Race", with no one attribute that stands out, but instead a balance of all stats and abilities as they are usually the basis of the design of all other main races.

Just to add to the insult, they all live longer than humans, too.

One thing humans can do to balance the scales, apparently, is mate with any of these superior species to create Half Human Hybrids with those traits. Sometimes even humans that were only raised by aliens are likely to somehow "inherit" abilities from their foster parents, or at least to pick things up as learned skills. The more "human" the alien is, the greater the apparent tendency to give them superpowers.

This may be because aliens in fiction are, more often than not, either outwardly indistinguishable from humans or just humans with stuff tacked on. No actor would put up with the makeup artist taking parts away.

As if all the above wasn't humiliating enough, aliens also are viewed as (or view themselves as) morally stronger than weak-principled humans who do such unthinkable things as murder, rape, pillage and hate. Thus, they have the ethical imperative to put them all on trial for their crimes if they so desire. Apparently, humans are the ONLY sentient race in the whole universe who've ever killed one of their own kind in anger; nobody ever questions this.

Point any of this out in the presence of the hero, though, and you're likely to get yourself a Patrick Stewart Speech. Sometimes the speech is justified; often even the physically superior aliens will admit that Humans Are Special for having accomplished so much with so little.

On the other hand, sometimes human "inferiority" isn't necessarily a bad thing. While humans might lack the strengths of the aliens in question, they might also lack its weaknesses. More than anything, humans are adaptable, oftentimes moreso than the supposedly "superior" races. Unless you take into account that many of these weaknesses are usually very rare, while they can bathe in stuff that can kill humans in seconds.

This trope may be invoked as well by Physical Gods, demons and magic or supernatural entities. Instead of "Puny Earthlings", they will usually call us "Puny mortals", but the rest is basically the same.

In Fantasy that uses the Tolkienian archetypes for non-human races, elves are typically longer-lived, more graceful and refined, wiser and better with magic than humans. Dwarves are also longer-lived, are physically tougher and often have superior technology, frequently Steampunkish compared to what others have.

This trope is common because, even among Earthly life forms, most people (and intellectuals/writers) believe humans are squishy wizards who hold an obvious advantage only in intelligence. Other animals are always faster, stronger, tougher and more agile than a human. In truth, humanity stacks up decently enough against many individual species rather than the vague "animal kingdom" amalgam that it is most often compared to, but quite badly against other predators in everything except for endurance. It is in fact likely that a human (even prehistoric) deprived of their intelligence and thus ability to manufacture tools, clothing, and shelter would rapidly die from starvation and exposure. Other predators rely purely on their innate physical abilities. The fact that intelligence and the manual dexterity to apply it are simply our "innate physical abilities" doesn't change the fact that it seems like "cheating" to weigh such abilities against pure muscle, speed, or agility.

Compare and contrast Being Human Sucks, which is where humans think they suck compare to the aliens. Contrast Humanity Is Superior, Humans Are Special, Humans Are Cthulhu, and Humans Are Warriors. See also Humans Are the Real Monsters, Humans Are Morons, Humans Are Average, and Insignificant Little Blue Planet.

Not to be confused with Earthlings.

I Will Burn This Planet Down

Before I spend another minute among these animals.

I Will Burn This Planet Down

Before I spend another minute among these animals.