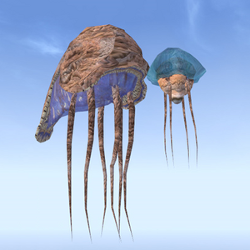 Don't trust these guys, they're full of hot air.
"The giant air-floater from the dark elf lands. Only the brave dare to hunt them, only the strong survive them."
— A netch hunter (on his quarry), The Elder Scrolls V: Skyrim — Dragonborn
Advertisement:

Lightweight, floating creatures are a great way to dress up your Alien Sky or populate a gas giant. Typically hollow, and filled with a light gas of some sort, these creatures usually resemble blimps or jellyfish or some strange hybrid. They may be large or small. If large, they may be used as transportation by the natives or colonists. If they're filled with hydrogen, expect them to be highly explosive.

They may drift aimlessly, but it's more likely that they can exercise some control over their flight, possibly with small wings, or by emitting puffs of gas. While they are primarily decorative, some may be useful, some may be dangerous, and a few may even be intelligent. If they're intelligent and hydrogen-filled, they will probably have a very rational fear of fire.

These creatures are most commonly found in a specific set of environments. Firstly, due to their highly alien and often bizarre appearance, they may be included the skies of alien worlds or lands to emphasize how different these places are from everyday Kansas skies. Secondly, they are often included in the fauna of places like gas giants or Worlds in the Sky, where no solid ground exists and all life needs to stay aloft.

Often overlaps with Starfish Alien or Flying Seafood Special. Self-propelled forms employ Bizarre Alien Locomotion. May count as a Giant Flyer. May double as a Living Ship, in which case it's probably also a Cool Airship or even an Airborne Aircraft Carrier. Compare Space Whale and Zeppelins from Another World. May provide Balloonacy.

Definitely not to be confused with Gasshole.