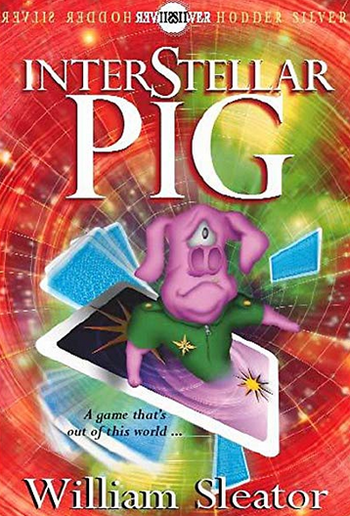 Sixteen-year-old Barney is resigned to another boring vacation at his parents' summer rental, reading science fiction novels and keeping out of the sun. When Zena, Manny, and Joe move into the cinder-block cottage next door, Barney is intrigued by their glamorous, exotic lifestyle. His fascination grows when Zena introduces Barney to their favorite pastime: Interstellar Pig, a board game in which the key objective is to finish the game with the Piggy card in hand.

Zena quickly briefs him on the rules: each player picks their character from a box of cards depicting different aliens. Every alien race has their own strengths, weaknesses, and IRSC (Interstellar Relative Sapience Code, which rates the species' intelligence). When the time runs out, every home planet will be obliterated except the one belonging to the holder of the Piggy.

Soon Barney is immersed in the game. But why do his neighbors keep picking the same aliens every time they play, and dissuade him from learning about themselves? Is it just a game? Or could the fate of the entire planet be at stake?

It was followed up in 2002 by a sequel, Parasite Pig, where Barney is once more pulled back into the game.