Video Game / Ori and the Will of the Wisps 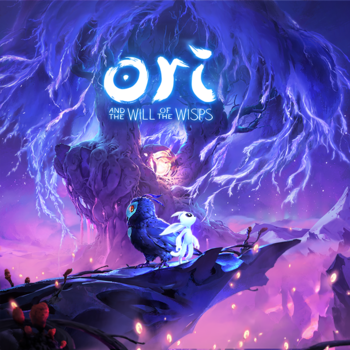 The sequel to Moon Studios' Ori and the Blind Forest, announced at E3 2017 and released on March 11, 2020, for Xbox One and Windows 10, with a Nintendo Switch port later on September 17 that same year. Like its predecessor, it is a Metroidvania in which you play as the foxlike light creature Ori.
Advertisement:

Things are peaceful in Nibel. Ori, Naru and Gumo are living happily after restoring the light, and raising Ku, the last hatchling of Kuro. But Ku longs to fly, a longing hampered by her malformed wing. Ori decided to remedy this with Kuro's feather, allowing the two to take flight.

But a vicious storm soon separates the two, dropping Ori into the distant land of Niwen. Much like Nibel before it, the forest of Niwen is cursed with a vicious blight and tormented by a fearsome owl monster. Now Ori must track down its wayward friend, and will discover its own epic destiny in the process.

Ori and the Will of the Wisps contains these tropes: