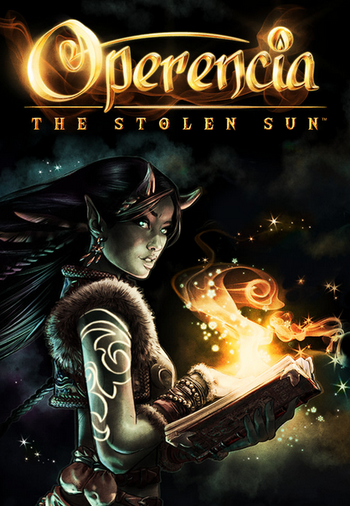 Operencia: The Stolen Sun is a first-person Dungeon Crawler Western RPG game with Turn-Based Combat and Metroidvania elements, developed by the Hungarian Zen Studios, and released on PC (through th Epic Games Store) and Xbox One on March 29th, 2019.
Advertisement:

The story is loosely based on the various Hungarian and other Central European myths. It takes place in a realm of Operencia, which is plunged in a crisis of succession after the unquestionably respected King Attila has died. Forces of the Underworld, desperate for revenge after Attila had cut their previous invasion short decades ago, have chosen to pay back by kidnapping the Sun King Napkirály.

A little earlier on, a simple player-generated farmer becomes haunted by a dream of a white stag leading them to a castle under the lake. Their father realizes this to be a sign from the legendary Csodaszarvas, and blesses them on their way to the Castle of Anna, which had sunk due to a terrible curse. They emerge from it right as the Underworld invasion occurred, and the realm was plunged into darkness. Now, it's up to them and the companions they find on their way to free the Sun King and beat back the invasion.