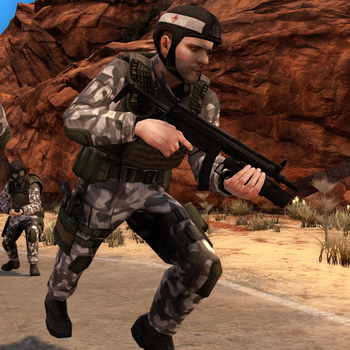 One team, one fight.
Advertisement:

A dead warrior is useless in battle. That is why in combat-based video games there will always be significant focus on restoring health. It might be strictly controlled through the use traditional First Aid Kit, Health Food or painkillers, obtained directly from enemies or happen any time you’re not being damaged. It might even be impossible unless there’s a dedicated healer present. Sometimes, it goes as far as reviving an already dead character. In any case, it is always something restricted to the player’s side.

You see, some games will include mooks that are dedicated to healing their allies. They might be restricted to healing one at a time, or create healing waves that work on all mooks in the vicinity. Sometimes, they will revive already fallen mooks instead, though it is not unheard of to combine both functions. Usually, they will be weaker than combat-only mooks, and might even lack any means of offense. If they happen to be just as or more competent at fighting than basic mooks, they’re almostly certainly Elite Mooks and/or Demonic Spiders.

Their inclusion in a game will often lead to players crying That's cheating!, then proceeding to Shoot the Medic First.

See also Mook Commander for another type of supporting mook.

Well, I have finally finished that page. It was pretty easy ... wait, did you just restart all of it again?!