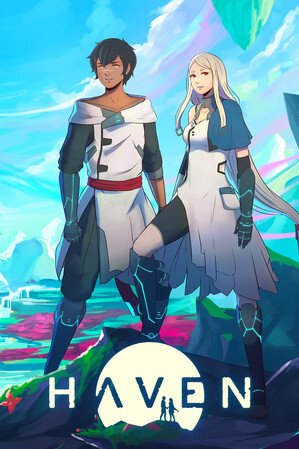 Does love really conquer all?
Advertisement:

Haven is a sci-fi adventure RPG developed and published by The Game Bakers, released on December 3rd, 2020 for the PC, Xbox, PlayStation, and Nintendo Switch. The game is focused equally on exploration and the romance between the two main characters and features an original soundtrack by Danger, who also contributed to the soundtrack of The Game Bakers' previous title, Furi.

Kay and Yu are a young couple who have fled from the Apiary, the oppressive interplanetary regime that dictated their lives. They find themselves on a strange, uncharted planet called Source where they hope they can live out their lives in peace. Unfortunately, the planet is more dangerous than expected. Aggressive beasts, strange corruption, sudden earthquakes, and the looming threat of the Apiary's search parties all threaten the young couple. Together, they'll have to confront the forces that threaten to tear them apart as they settle into their new home.

In March 2022, the developers released the "Couple Update", a patch for the game that allows the player to swap the gender of Kay or Yu, allowing for the option to play through the story as a same sex couple.

This game is not to be confused for Haven: Call of the King, nor is there any relation between the two.