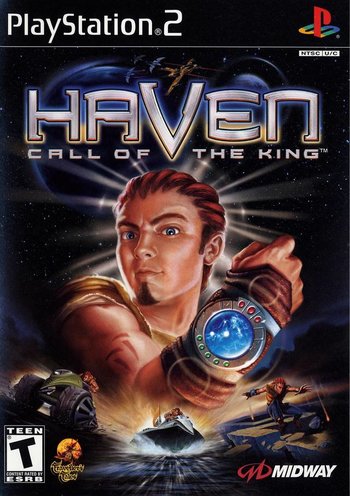 "Get ready to use everything you have ever learned."
Quote taken from the back of the box regarding its Gameplay Roulette.note And considering how that fared...
Advertisement:

Haven: Call of the King is a 2002 Action-Adventure game developed by Traveller's Tales and published by Midway Games and was planned to be the first part of a trilogy. It was released on PlayStation 2, with ports for the Xbox and Nintendo GameCube cancelled.

The game's plot revolved around the titular character, Haven. After receiving a dream about the "Golden Voice", he's become targeted by the evil Lord Vetch. After his friend, Chess, is captured thanks to this dream, Haven sets out to rescue her and find out the secret behind this dream.

The game was notable for its ambitious development, trying to incorporate as many different genres as possible, with Midway even trademarking the term FreeFormer and called it "the next major development in videogaming". What was released was met with mixed reception at best and any plans for a future were crushed.

Haven: Call of the King provides examples of: