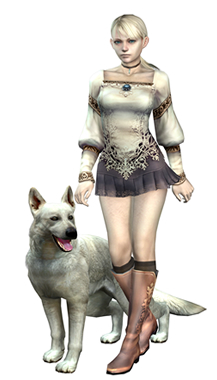 Fiona, the player character, and her Canine Companion, Hewie.
Advertisement:

Haunting Ground (aka Demento) is a lesser-known adventure-horror game released by Capcom.

Fiona Belli is a young woman who was involved in a unfortunate car accident. She later awakens in a castle and has no idea how she got there. Her main objective is to get the hell out, but the sinister residents of the castle have different plans for our heroine...

The gameplay revolves much more on evading enemies and hiding than combat, as Fiona's fighting abilities (she can kick opponents, but it's very weak) are extremely limited (mainly as a throwback to the Clock Tower games, of which this game was to be the fifth installment, but was changed during production). Her health is measured by how calm she is—checking the wrong object or prolonged chases by enemies can cause her to be overcome with fear and panic, which is portrayed in the form of a blurry, distorted screen and problems controlling her. She eventually runs into an ally in the form of a dog named Hewie, who can be commanded to attack enemies, fetch items, or follow Fiona. The game has an unseen friendship meter of sorts — Fiona can either protect the dog or literally Kick the Dog — but abuse will make Hewie become distant from Fiona, causing him to ignore her commands or be slower to respond when Fiona becomes panicked.