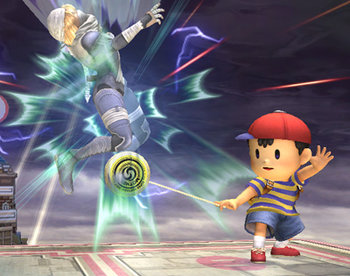 Ness demonstrates, at the expense of Sheik.
A variation on throwing weapons, yo-yos allow you to both throw the weapon a short distance and then have it come back to you, without any antigravity generators or built in homing devices.
— 1001 Science Fiction Weapons
Advertisement:

According to legend, the ancient, simple child's toy known as the yo-yo took on use as a deadly weapon in the hands of Filipino tribesmen centuries ago.note There is no historical evidence of this. Historians attribute the legend to Filipino hero Jose Rizal, who claimed it either as a joke or a fun, creative story — he used to carve and play with yo-yos while traveling on ships, and founded a massively successful company the produced and sold yo-yos in the United States, which generated a mass yo-yo craze that lasted even throughout The Great Depression. Whether it's true or not, if you see a yo-yo in a series with combat, particularly in an anime or video game and particularly in the hands of a young child, it's a safe bet that it will be slung with deadly intent and accuracy.

The legend may stem partially from the fact that as a weapon, the yo-yo bears a resemblance to a few hunting tools and weapons such as the Chinese meteor-hammer, the Argentinian bolas, and the maritime slungshot. The mundane yo-yo makes a cute and fancy stand-in for these types of weapons. It's also no joke that some yo-yo toys, from the traditional Chinese yo-yo to modern metal, weighted ones, can cause serious injuries purely by accident. Even the small plastic modern yo-yos, in the hands of a small child, can, and sometimes will, cause major harm to anyone and anything in the yo-yo's vicinity without the need of any magic or special training at all.

A type of Epic Flail. See also Improbable Weapon User. Compare Battle Tops. Your Killer Yoyo is likely to be wielded by a Badass Adorable or a Little Miss Badass, if the writer is playing up the "deadly yet cute" aspect of this trope.