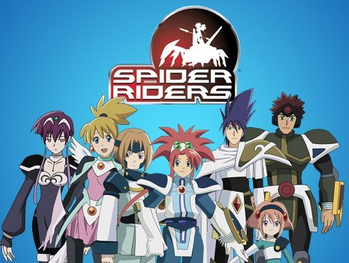 "There exists within the planet Earth a fantastic lost world. In this Inner World, elite warriors ride huge spiders and bravely fight against evil. When the wicked rise, the word goes out: Calling all Spider Riders!"
— English opening Narration
Advertisement:

Within the Earth exists the Inner World, created and blessed by a being known as the Spirit Oracle. There, a war has been waging between the humans and Insectors/Invectids. Following the journal of his late grandfather, 13-year-old Hunter Steele finds himself drawn into the Inner World. He soon encounters the independent spider Shadow, who eventually becomes his partner, as well as the mysterious girl Corona, one of the elite warriors known as Spider Riders, who welcomes Hunter into their team.

Along with Corona, Igneous, Prince Lumen, Princess Sparkle, and the former wanderer Magma, Hunter fights against Mantid and his Insector army, trying to prevent them from collecting the four Oracle Keys.

Though the American dub of the show was cut short, it did receive a full release in Canada. There is also a novel series, online game, and canceled manga as part of the franchise.