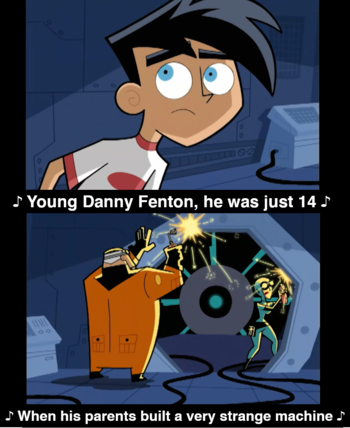 A Theme Tune which explains, fairly specifically, the premise of the show. An Opening Narration in verse. It might also throw in an Introdump for the central characters during the middle 10 seconds.

This was fairly standard for the early sitcom. Later sitcoms moved away from this form in favor of the Thematic Theme Tune, and then toward the Surreal Theme Tune. Today, the Expository Theme Tune is limited mostly to children's programs. Gilligan's Island, the most famous, used it specifically due to Executive Meddling, so that people who tuned in after the pilot wouldn't get lost. Many kids' shows that use it don't even have a pilot, or air episodes out of order. (Animaniacs and Freakazoid! are the big examples.)

This style of Theme Tune is also the most common for a Show Within a Show, and is practically universal when the fictional show is meant to be mocked.