Even Evil Has Loved Ones 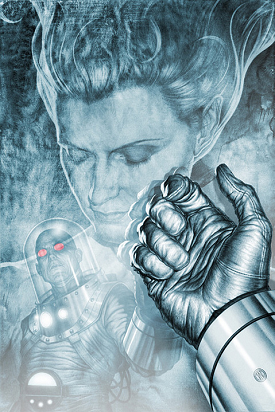 "I can only beg your forgiveness, and pray you hear me somehow, someplace… someplace where a warm hand waits for mine."
"Scum, maybe. But even scum has family."
— Batman: Year One
Advertisement:

Being evil doesn't always mean hatred and negativity 24/7. Even evil characters (and real people) can find someone to love. Often, that love is twisted, a cause for villainy or an act but sometimes a work can show an evil character's love is genuine and deep. This serves to humanize the character, to give the hero doubts about fighting him/her, or to provide a weakness for the hero to exploit. At an extreme end, can provoke Mama Bear or Papa Wolf reactions if they are threatened (or turning into a Tragic Monster at worst), or prompt the loved ones to Avenging the Villain. It also marks the villain as hypocritical and shows his twisted worldview by treating everyone else as insects but excluding the few ones he has feelings of affection for.

For the reciprocal situation, where an evil character has someone who loves them, see Even Evil Can Be Loved.

Compare Even Evil Has Standards when an evil character objects to or is disturbed by certain acts towards anyone and not just his own, Morality Pet, Mad Scientist's Beautiful Daughter, Daddy's Little Villain, The Family That Slays Together, Villainous Friendship, Minion Shipping, and Unholy Matrimony. Can often overlap with Evil Parents Want Good Kids, especially if the villain is an Anti-Villain. If the evil character in question is a mook, and said love brings them in conflict with their own boss, that's Even Mooks Have Loved Ones. Guaranteed that it will overlap with Moral Myopia when the villain sees no problem with their own methods, until those methods are turned on the ones they love. When the villain turned evil as a result of their love for others, it's Love Makes You Evil. Contrast with Even the Loving Hero Has Hated Ones, where an All-Loving Hero despises at least one character.

Villains who are Complete Monsters can never qualify as this trope, as they are incapable of feeling love for anyone but themselves. Sometimes, if they show a sort of love that seems genuine, it's revealed to be for pragmatic or self-serving reasons. Even if it was genuine at some point, that love is twisted into something vile and selfish to the point where it's no longer genuine love but rather possessive obsession.

Dick Dastardly as despicable he may be genuinely cares for his faithful companion and lackey Muttley (despite getting briefly mad with him for making him think he was dead) going as far as risking his own life to rescue him by opening the Underworld gates where Muttley was trapped. Muttley in turn also genuinely cares for his owner.

Dick Dastardly as despicable he may be genuinely cares for his faithful companion and lackey Muttley (despite getting briefly mad with him for making him think he was dead) going as far as risking his own life to rescue him by opening the Underworld gates where Muttley was trapped. Muttley in turn also genuinely cares for his owner.