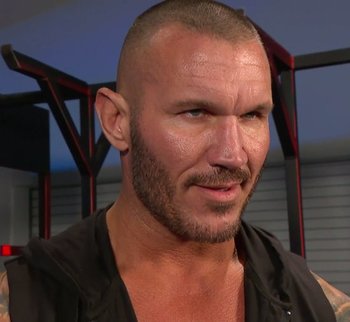 The Legend Killer.
"If you were to design a sports entertainer from the ground up, it would look exactly like Randy Orton."
— John "Bradshaw" Layfield
Advertisement:

Before being promoted to the main WWE roster, Orton trained in and wrestled for Mid-Missouri Wrestling Association-Southern Illinois Conference Wrestling for a month. He was then sent to Ohio Valley Wrestling (OVW). There, Orton held the OVW Hardcore Championship on two separate occasions.

After signing with WWE, Orton became a member of the stable Evolution, where he acquired the moniker "The Legend Killer": an unstoppable golem of a man who physically targeted Hall of Famers and other veterans of the industry, usually outside of appropriate restrictions. In 2004, Orton became the youngest World Heavyweight Champion when he won the title at the age of twenty-four (defeating Chris Benoit). This win resulted in his departure from Evolution and a feud with his former stablemates. In 2006, Orton joined forces with Edge in a tag team known as...er, Rated-RKO. Together, Orton and Edge held the World Tag Team Championship. After the team disbanded, Orton won the WWE Championship twice in one night in mid-2007 (said title changes being the only time that title changed hands that year).

These days, Orton is better known for his decade-long feud with John Cena — actually much longer, originating back when they were both scrappy upstarts in OVW. Ironically, in an inversion of their usual WWE feud dynamic, Orton was the face and Cena was the heel. In fact, you would be forgiven for thinking these two are descended gods who have been fighting down through the centuries. There's been roughly 30 single matches between Cena and Orton, but if you count multiple matches —Tag Matches, Triple Threats, Hell in a Cells, Elimination Matches, Elimination Chambers — the number is probably around 125.

Also considered one of the more practical/lazy wrestlers in the near century-long existence of pro wrestling (counting the carny days); while every other wrestler was coming up with new crazy risky moves to finally put their opponent down, Randy Orton was the one man to go "Why don't I kick him in the head really hard?"

"I hear voices in my head. They counsel me. They understand. They trope to me.":