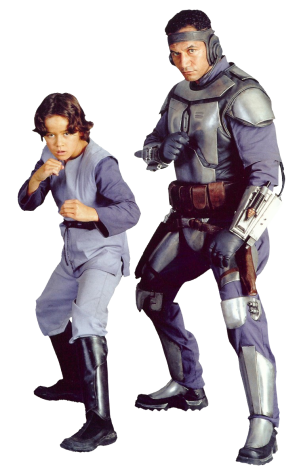 And the kid's also his clone, to boot!
Occurs when a parent and child team up as equals, especially with a common goal in mind. Beating up bad guys together, or something of the like, often comes in tow. In this scenario, the parent is very often single, and almost always very close to their child. Notably, parental substitutes may also apply in such team-ups.
Advertisement:

A sister trope to Sibling Team and Brother–Sister Team. May be part of a Badass Family or The Family That Slays Together. If the parent is also a part of their child's team-up, they may be the Token Adult.